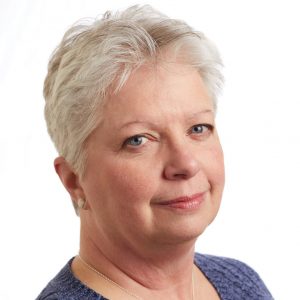 Mary grew up in Detroit, Michigan where her family were union workers in the auto industry. Her former father-in-law worked for the Ford Motor Co for thirty years – on the line as a polisher. In Mary’s words, “We used to talk about the “early days” – days when you didn’t leave work unless it was in groups of three or four, of how the “bosses” would be waiting with bats and axe handles, chains, knives – how many workers got hurt, how hard it was to win, and keep, their union. But he also told me of the Union meetings when they’d call a “strike”, blow the shop whistle and everyone would toss down their tools and walk out, how the Brotherhood of the United Auto Workers meant something and that if a Union family was in need the Union was there for them. It wasn’t that long ago that saying ‘I’m a union member’ was said with pride because it meant if someone were to take one on, they would have to take all of us on.”

Mary really enjoys bargaining. She says, “The first time I co-chaired Specials Coalition, the management negotiators turned their back everything we presented; it’s permissive, it’s already covered in the contract, it’s management’s equipment on and on. Talk about trial by fire! My first time at Central Table we bargained a remedy step-slide issue for workers who’d been economically hurt. As Co-chair, for this last contract, I helped bargain our first four year contract, the PERS take back and now I’m there to bargain our first economic re-opener. Contacts and the right to participate in collective bargaining are a core value that we must protect. Our contracts stand between us and work-sites that could be run by the likes of modern day Scrooges. They give us not only the right to grieve wrongs but also pathways to expect that we will have work-site that are healthy, safe and places where we are treated with respect for ourselves and the work we perform. We must never let this fundamental core right slip from our grasp.”

When asked about what she likes to do in her free time, Mary’s response was “what free time?” Between a 40 hour a week job, being President & Chief Steward of her Local (Revenue 150), Statewide CAPE Secretary, a General Council Delegate, Bargaining Delegate, supporting her daughters quest to get into Med school, one 23 year old horse, two eight year old cats and now SEIU 503 Statewide Secretary, she says that free time is hard to come by. Mary feels very fortunate to have a great Vice President coming up behind her in the Local. She says, “She’s going to make a great President. I’ve served three terms (6 years) on CAPE and I’ve heard about a talented person who’s a great minute taker so I have a plan. I plan to spend the next two (maybe four) years focusing on working with the rest of the Executive Team to bring us together and create a cohesive and responsive leadership team that inspires others to become leaders as well. And, as I work to raise others into theirs leadership roles and step back to a mentor role, I’m going to spend more time container gardening on my balcony, learning to quilt, reading more good books, riding my bike, my horse (or a new horse) traveling, taking pictures and visiting wherever my daughter is learning or practicing medicine.”