On Friday, the final gavel dropped on the 2017 session of the Oregon Legislature. Together, SEIU 503 members accomplished a great deal in Salem. We’re proud of the work legislators did to fund healthcare and protect workers from retirement cuts, but we’re left — again — without a long-term revenue solution that could have prevented cuts to education and programs that serve our state’s most vulnerable populations. Now that the legislature has adopted a final budget, contract negotiations for nearly 60,000 SEIU state (DAS), homecare, higher education, nursing home, adult foster care and child care workers will all kick into high gear. 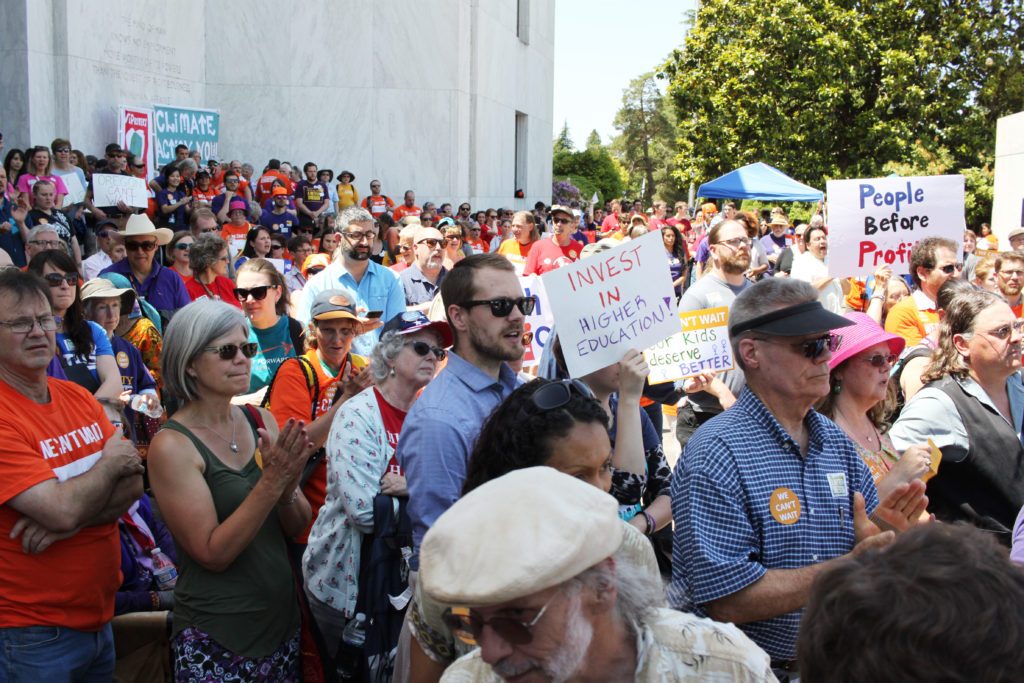 SEIU 503 members were a constant presence in Salem during the 2017 legislative session. On June 6, we held the Oregon Can’t Wait rally that brought together more than 1,000 teachers, nurses, homecare workers and public employees from every corner of the state to demand that legislators raise revenue to address the state’s budget deficit.

Hundreds of SEIU 503 members participated in lobby days where we had the chance to speak directly to our legislators. 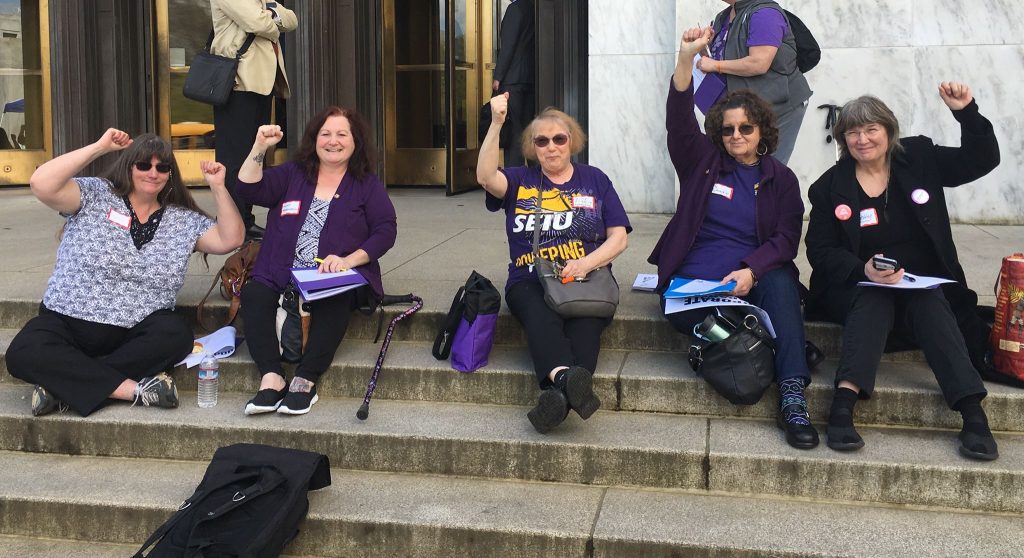 Members were also a regular presence in the media’s coverage of a wide range of stories, including Barbara Casey’s call for the legislature to fund child welfare, Maleta Christian’s plea to protect the Oregon Health Plan, rallies at the Capitol Building, and Steve Demarest’s push-back on cuts to member compensation.

On June 21, legislators passed a $670 million funding package that will protect healthcare for more than 300,000 Oregonians, including many SEIU 503 homecare and personal support workers, and lower premiums for many Oregonians as well. Oregon has a history of bipartisan work to make healthcare affordable and accessible — and it shows. 95 percent of Oregonians now have health insurance, and leaders in the Legislature, as well as Governor Kate Brown, fought hard this year to ensure that continues despite threats to our progress from the Trump administration. 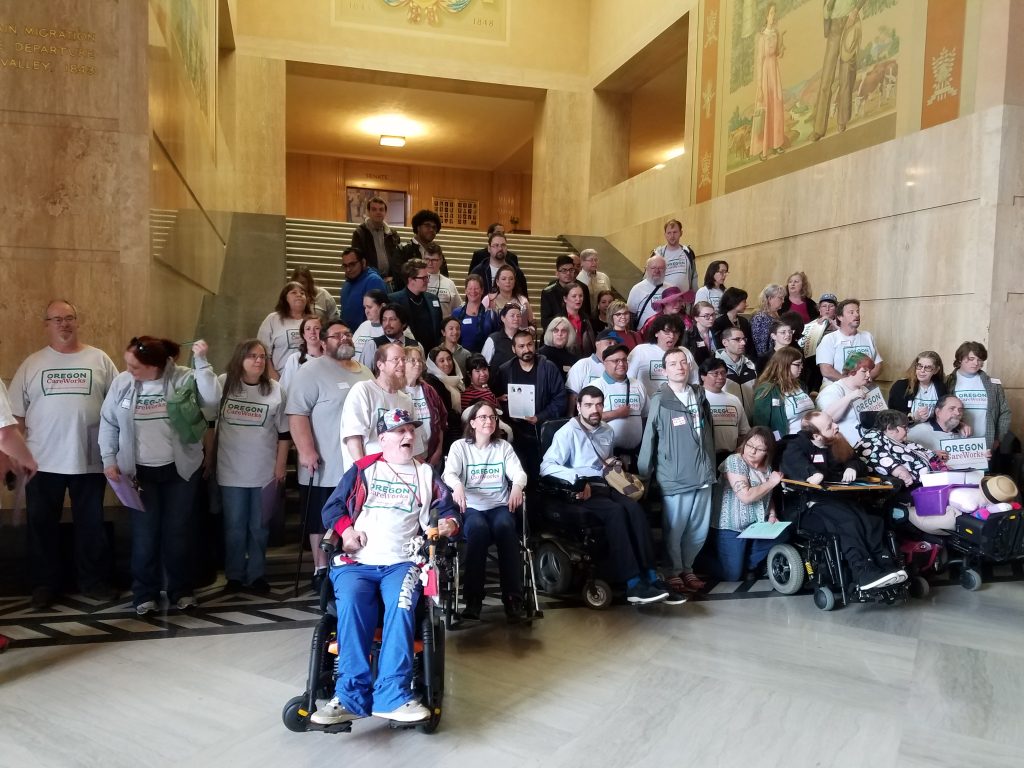 CareWorks activists pose for a photo in the Capitol rotunda

Oregon’s legislative session has come to a close and we’re excited to report on two major advances we’ve made by working together in CareWorks!

First, we helped empower homecare workers by eliminating non-compete agreements. Many private agencies employing homecare workers have required them to sign non-compete agreements, preventing caregivers from working through another agency where they could earn higher pay or work for other consumers. This practice, while unenforceable in court, intimidated many caregivers from seeking other positions in the field. The bill CareWorks activists helped pass prevents homecare agencies from threatening workers or consumers with a lawsuit if they decide to leave the agency for better pay, better support, or higher quality care.

Second, we won improvements to conditions for people with intellectual and developmental disabilities and the Direct Support Professionals who provide supports in group homes. Through the efforts of hundreds of CareWorks activists, we passed a bill that will create a commission to study staffing improvements, improve wages and training for workers, and improve enforcement for abuse and other violations of the law. As a result of our efforts, the Legislature also took steps to ensure that consumers are informed about independent living options in addition to group homes. 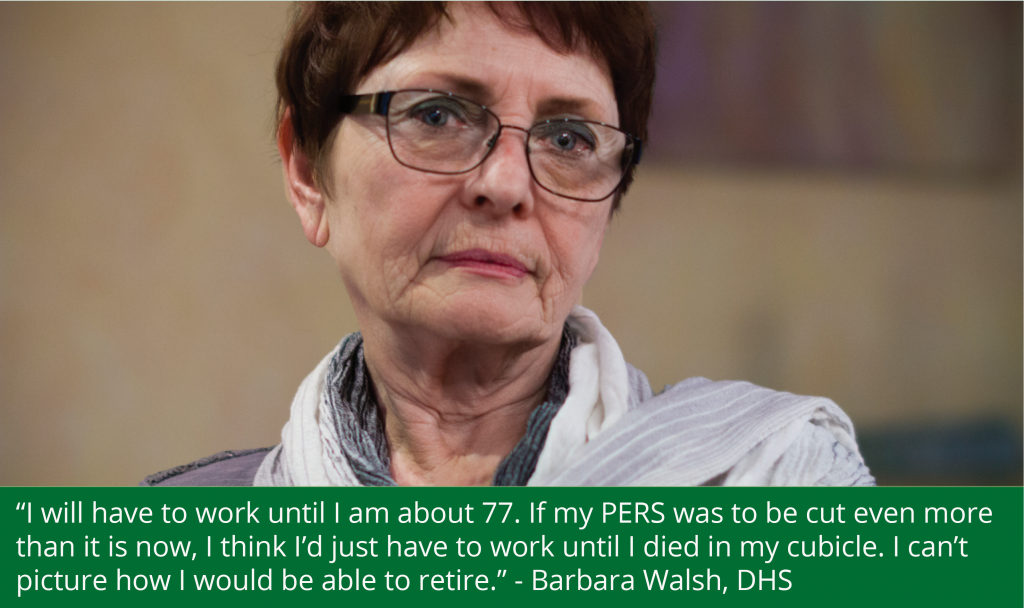 Legislators introduced 40 pieces of legislation this session aimed at cutting retirement benefits for public employees. None of them passed. Even on the final day of session, Republican legislators introduced an amendment that would have slashed retirement benefits, slashed healthcare plans, and halted salary increases. This last-minute gambit was also defeated. Our success speaks to the years of work that SEIU 503 members put into building political power through our union.

As we look toward the future it’s clear that the PERS unfunded liability is a real problem the state must address. However, Oregon will not succeed in addressing this problem if public employees — who are not at fault for the losses stemming from the 2008 Wall Street crash — are expected to shoulder the entire burden themselves. 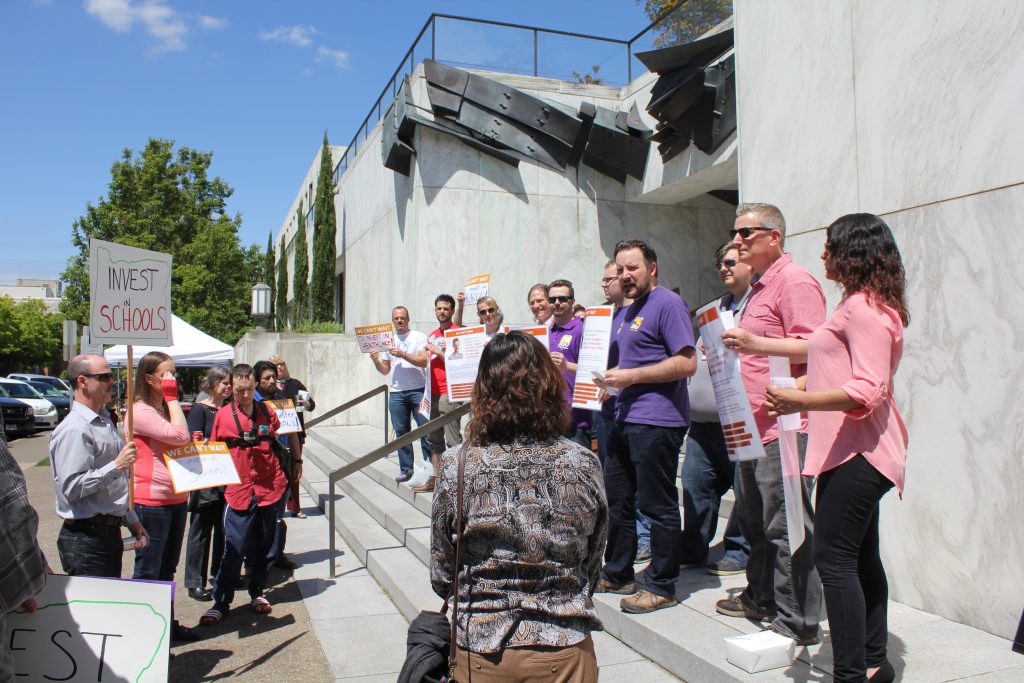 Before the session, Oregon’s business community said they would come to the table and work toward long-term solutions for funding education and critical public services in Oregon. What we got from them was anything but solutions. Instead they stalled or obstructed efforts to reform corporate taxes, even when many individual businesses supported compromise proposals.

Without reform, Oregon’s corporate taxes remain among the lowest in the country, and our state will continue to underfund schools and services. Many SEIU 503 members will see cuts to the agencies or programs they work for, and almost every member will face a difficult bargaining environment. 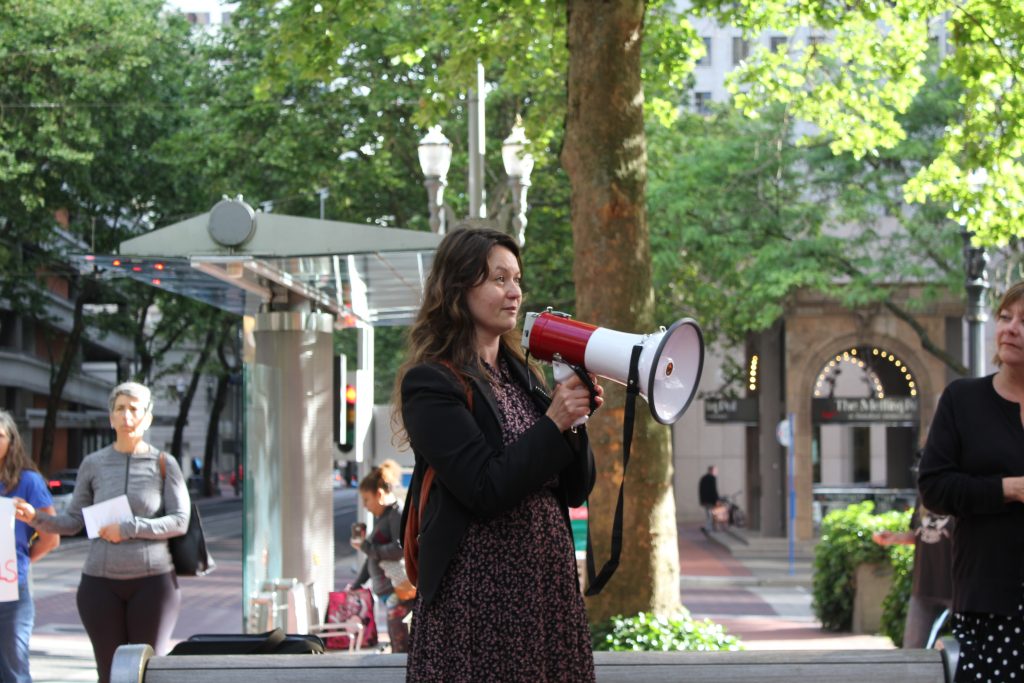 Even in a year when most budgets were cut, consistent activism by union members ensured that legislators recognized the need to invest in child welfare. The program will receive a modest (but badly needed) boost of $30 million in the next budget. The money will go to address two problems plaguing the system: understaffing and a lack of placement options.

At the start of session, homecare and personal support workers (PSWs) faced severe cuts that — thanks to the work of SEIU 503 members — we were able to stop or minimize. We were able to protect funding for Oregon Project Independence, overtime eligibility for PSWs, funding for nursing homes and nursing home workers, and the Fairview Trust. Unfortunately, the state will still reduce funding to DHS, which will result in closing the homecare live-in program, a recalculation of homecare worker hours which may result in reductions, cuts to services for people with intellectual and developmental disabilities, and reduced support for the I/DD family care program. 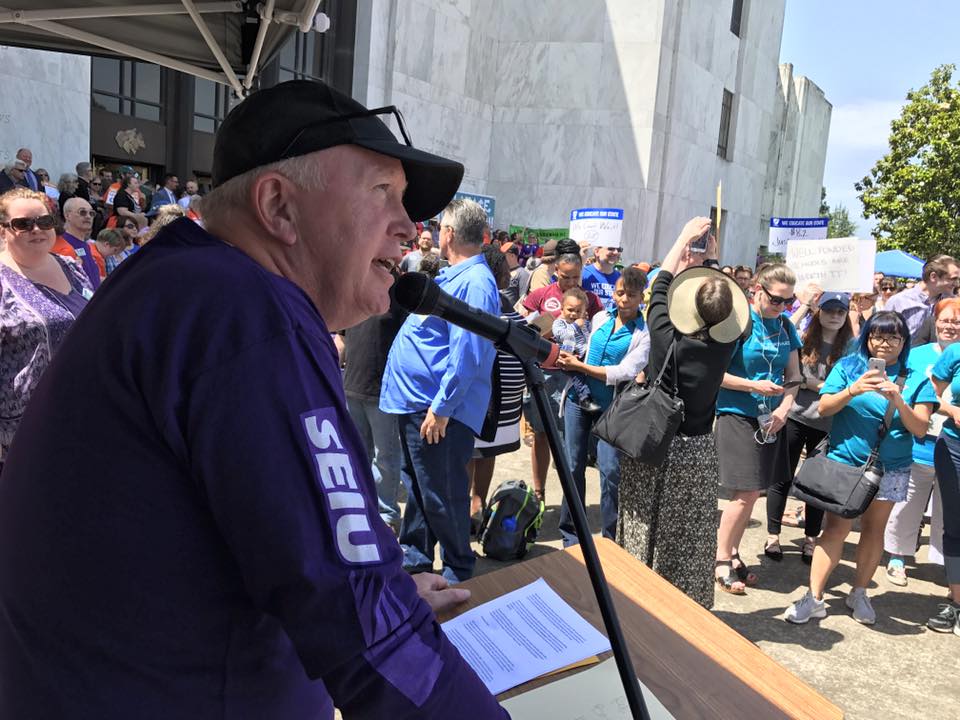 Steven Demarest, President of SEIU 503, leads a rally on the Capitol steps

Despite these roadblocks, our broad coalition of organizations and activists joined with Governor Brown and leaders in the Oregon House and Senate to make real progress for members and our communities. Together, we won victories on healthcare, workers rights, reproductive rights, health insurance for every kid in Oregon, and more.

Over the next two years we will continue our fight for corporate tax reform. Together with our ally union AFSCME we have filed a 2018 ballot measure that, if approved, would require corporations to disclose how much they pay in state taxes. This will allow legislators and the public to separate valid business concerns from political rhetoric, and arm Oregon with information to craft smart tax policy.

We hope you will stand with your fellow SEIU 503 members as we carry this fight forward.