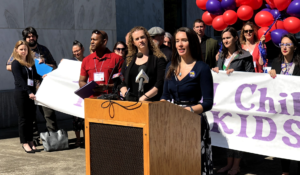 The crisis in Oregon’s foster care system highlights the risk we take when we underfund the resources Oregon families depend on. Over the past two decades, Child Welfare Services has seen understaffed departments, high caseloads, a lack of state resources for supporting kids, their parents and foster families, and a general lack of infrastructure to catch child neglect as it is happening. As a result, Child Welfare workers across the state have come together to demand that passing revenue and allocating the appropriate funding to the department is top priority.

“I don’t know that the department has ever been fully funded. It’s always been underfunded since I have worked here,” says Kelly Ingles, a Child Welfare worker for almost fifteen years. “Kids need time, they need relationships, they need to feel connected, and they need to know you care. How can you do that if you’re always running?”

In the past decade, the state has lost 15% of foster parents and a full 55% of foster homes, and the lack of resources and exploding caseloads for state child welfare workers means many of the most at-risk kids are not getting the support they need. Because families and children are not getting the support they need, this crisis is not just impacting DHS, but other services like healthcare and law enforcement.

“These are children, and they are our most vulnerable children that will grow up to be adults.  They deserve a chance to have stability and consistency and a healthy childhood, and we aren’t doing that right now,” says Ingles.

On average, caseworkers carry a caseload that is three times higher than the DHS standard for the optimal caseload. This problem is even worse in rural parts of the state where travel is not even taken into account with workload standards. The lack of institutional resources has led to a class action lawsuit against the state for treatment of children, including increased out of state placements because of a lack of local resources and incredibly long wait times on the abuse and neglect reporting hotline, as well as a lack of culturally appropriate foster placements. These workload issues have also led to huge retention issues in Child Welfare, where DHS has some of the worst retention rates in the state. Caseworker resignation rates are twice as high as the statewide average.  It is unbearable to come to work and be the face representing the multiple systems that are failing families.

The child welfare system is now collapsing under the weight of systemic understaffing and poor retention, and the children are forced to bare the brunt of these issues. The situation has been so dire that in 2018, the Secretary of State’s office called for 700 new child welfare workers to fill the gap, but children and families are still waiting for most of these positions to be added.

“Oregon must partner with us and invest in the entire child welfare system. It’s time for the Legislature to fully fund child welfare,” said Sara Ashmore, an adolescent permanency caseworker, in a recent op-ed for The Oregonian.

With increased staffing,  case workers could provide more individualized care, shrink hold times on the abuse hotline, and keep kids near their homes and communities. A reprioritization of Child Welfare in the state’s budget would ensure that we can actually meet what is required by the system.

“There is just no way they can keep up when someone has more children on their caseload than they have hours in their work week,” says Marissa Johnson, a facilitator with Foster Homes of Healing. “How can we expect an optimum partnership?  What has to happen is folks have to focus their efforts on the most dangerous scenarios first, so we are always reactive and we can never get ahead of it.”

With new funding measures that Child Welfare workers are proposing, the goal is to increase the capacity of Child Welfare, so that a more holistic approach can be taken to child welfare crisis. This would lead to more appropriate case management, increasing our foster system capacity, keeping kids in their communities, near their families and supports and address complex needs before they enter a period of crisis where options become limited.

“Fully funding DHS will not only provide us with workers,” Irving said, “it will  also provide us with training so we can keep workers and retain workers. Many of us are unable to make a living off the wages we are making right now.”

The legislature just passed a historic revenue bill aimed at funding state services, but now the battle heats up to ensure that revenue plan is implemented and that the appropriate amount goes to the Child Welfare Department to change the situation. This will also mean a fight that heads into bargaining for the next Collective Bargaining Agreement between the workers and the state, which workers hope will finally ensure they are paid a living wage for the long hours of grueling work their department requires.