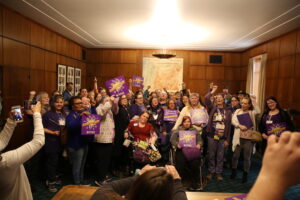 We’ve reached the halfway point of the 2019 legislative session, and legislators are focusing in on key pieces of legislation that will have a big impact on SEIU members.

Through our union’s political program, members are focused on funding strong contracts and protecting standards and benefits in our work. Our signature event of the legislative session will be the Rally for Revenue and a Fair Contract on Monday, May 20th at the Capitol. Register today!

Here are updates on some of our major legislative priorities:

Revenue to fund a strong contract

Legislators released a plan this week that would generate over $2 billion for the K-12 budget by raising taxes on corporations.

How this impacts you

The revenue mechanism is still being negotiated, so the details are dynamic.

HB 2016 (Public Worker Protection Act): HB 2016 codifies best practices in labor management. It dedicates time for workers to receive representation from their union, and it improves communications channels while protecting workers from harassment by anti-union organizations like the Freedom Foundation. The bill passed out of the House on March 27 and is now awaiting consideration in the Senate. We expect it will have another hearing in the new few weeks.

HB 3075 (Double Coverage): Our bill to protect double coverage voted out of committee on April 2 and sent to the House Committee on Rules. We will be working with our coalition partners to make necessary amendments to the bill before moving it to the Senate.

SB 669 (private home care reform): This bill, the top priority in the Care Agenda, would create universal standards for public and private homecare providers rather than the existing dual system that leaves private healthcare consumers and workers vulnerable. The bill was moved to Ways and Means as expected. We continue to work with key stakeholders on amendments that will ensure the passage of the bill.