The Oregonian highlights SEIU 503 member wins at the Oregon Legislature 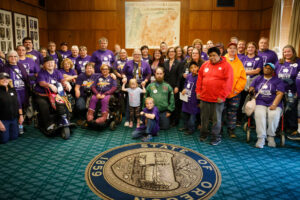 The Oregonian’s Sunday print edition featured an article highlighting a historic 2019 legislative session at the Oregon State Legislature: Democrats pile up landmark wins that will affect Oregon schools, businesses, workers, air quality, teen criminals and more. Many of these significant victories were the direct result of SEIU 503 members standing together and with our allies to fight for a better Oregon. Some of the wins, including the Student Success Act, came after more than a decade of effort by our members and coalition partners. While we did suffer some hits, especially the cut to state employee retirement that we are preparing to fight in court, 2019 was a year of big wins for our members and the people who rely on the quality services we provide. These wins include:

“Expanded Democratic power yielded multiple wins for public employee unions, who were major campaign supporters in 2018. In addition to the new business tax, which unions sought for years including unsuccessfully at the ballot in 2016, Democrats on party line votes passed a law to make it easier to opt into union membership and possibly more difficult to opt out. House Bill 2016 also enshrine some labor issues previously subject to collective bargaining in state law.”

“Starting in 2023, Oregon workers will be able to receive up to 12 weeks of paid time off to care for a new baby or sick family member or recover from their own serious illness, through a new state family and medical leave insurance program.”

“In the final days of the session, lawmakers also set aside $200 million for state employee salary and benefit increases. That’s double the amount they budgeted two years ago. The upshot soon became clear, with an announcement Friday by the state’s largest public employee union SEIU 503 that a new contract will raise many state employees’ salaries by as much as 15 percent over the next two years. Cost-of-living raises of up to 3 percent a year are “the largest COLAs in 10 years,” the union said in a press release. The contract also adds a new step at the top of the payscale, for the first time in more than a decade.”

“On a bipartisan basis, lawmakers voted to preserve the option for couples who both work for state government or schools to double up on health insurance — a choice the state was going to eliminate this year, under a 2017 package of cost-cutting changes. With average monthly premiums of $17.47 a month for state employee family insurance plans in 2018, signing up for duplicate coverage is a no-brainer for many couples.”

“Next up was an extension and increase of hospital and health insurance taxes to fund the state’s Medicaid insurance program for the poor. Negotiated by Gov. Kate Brown’s administration in 2018 and passed with bipartisan support in February, the tax plan is expected to raise $335 million in the next two years and $1.8 billion in the following biennium.”