Union Support Growing Throughout the Country 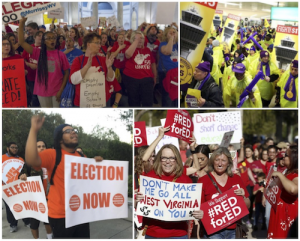 In the wake of our February 26 day of action with SEIU locals throughout the country, elected officials, news outlets, thought leaders and academics are speaking up in support of unions as we approach a decision on the Supreme Court case Janus v. AFSCME. Though a decision in favor of unions is unlikely, it has not stopped a groundswell of union activity throughout the country.

At the end of February and into March, public school teachers in West Virginia went on strike for nine days until the Governor was able to convince both the State House and Senate to approve a 5 percent increase for teachers. Since then, teachers in Oklahoma, Kentucky and historically anti-union Arizona have taken collective action towards improving wages and healthcare for some of the lowest paid teachers in our country.

Adjuncts in Chicago, Florida, and Iowa have all begun organizing unions at their worksites. Workers at Burgerville have continued to strike, petitioning the NLRB for what could be the first recognized fast-food worker union. US Senator Kamala Harris highlighted that unions have been at the forefront of challenging the institutions and leaders that divide us. Oregon House Speaker Tina Kotek published a piece in the Oregonian asking folks to “remember that unions make entire neighborhoods and communities better off.”

Below is a collection of stories highlighting the importance of staying #UnionStrong.