University Staff Join Together to March Against Management’s Disrespect 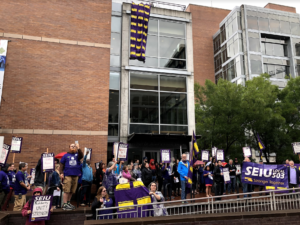 In the midst of a challenging bargaining season between university workers and university administrators, the employees who make our university work have started to come together in an unprecedented campaign to defend our public education system.

On Thursday, June 27th, 150 higher education employees rallied at Portland State University’s urban campus, sharing frustrations and hopes around a contentious bargaining campaign. University administration plans to cut healthcare for low-wage employees, which could result in some families losing $250 per month. They’re also raising tuition. Based on that you’d think it was a lean year, but think again. State funding for Higher Education has never been higher.

Bargaining Chair Rob Fullmer explained exactly where we are at in bargaining, and why we need to be ready to walk out when the time comes.

“If we are going to get a good contract, it is up to all of you and your coworkers who couldn’t be here today, because the only way we can get a good contract and avoid a strike is by being 100% ready and prepared to strike,” said Rob amid cheers of classified staff who had gathered together in the rain to show their strength.

Leaders from other universities joined the rally at PSU in a show of solidarity across different campuses, acknowledging that our real strength comes from our ability to be united statewide.

“I care about bargaining because I think people deserve a livable wage,” said Stephanie Prentiss, the Vice President of the University of Oregon’s sublocal.

After a round of speeches, the employees marched through the lush Park Blocks and through the square to the Urban Studies building, where activists dropped a banner from the roof to let students and community members know exactly what was happening.

“In my entire life, I have never seen the type of disrespect that management has shown to us,” said David filbert, who works in the housing department as a maintenance staff person and is the Chief Steward of his sublocal.

“I believe that management doesn’t take us seriously, and even though they sit behind their fancy desks and have the money, we have the power. Union power.”


Classified staff chanted “Chop from the Top,” a message to management that before they try and lower the compensation of the working class members of the university community, they need to take a look at highly paid administrative salaries. For example, the University of Oregon President Michael Schill makes upwards of $720,000 a year and football coach Mario Cristobal makes $2.5 million each year. Compare this to many of the frontline workers who make less than $15 dollars an hour, yet the administration is still saying that these employees are asking for too much. Students and faculty supporters surrounded the boisterous crowd of workers, joining together in a statement of collaboration in improving our university conditions for student success.

This momentum will continue through the summer as the bargaining team continues to press management on their disrespectful offer and staff come together to raise the profile of their campaign. The most important thing that bargaining unit members can do to support a fair contract is to ensure their membership is current, which you can do by clicking here. 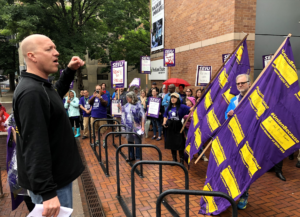