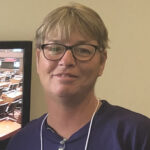 Diana started out in homecare by taking care of her father when he fell ill, and then later cared for her grandmother. “As I went through life, I realized it was something I loved to do—taking care of people,” Diana said. “It seemed to be my calling.”  Diana has been a care provider for 9 years now and says, “It’s a passion of mine.”

Making that personal connection with her clients/consumers means a lot to Diana. One of her most gratifying experiences was taking on a client who had suffered for an extended period of time with constant infections requiring multiple hospital visits. Under Diana’s watch, her client’s health quickly improved, and she didn’t require another hospitalization for over a year. Her doctor even commented on how Diana’s quality care had been essential in turning things around and noted she was in better health than she had been in quite some time. To see her consumers happy and healthy is Diana’s greatest reward.

Improvements in the lives of consumers and care providers since Homecare workers joined 503 have been nothing short of life-changing for both. “My first introduction to the union was at the new employee orientation. I didn’t know anything about it,” Diana said. “I decided to get involved and started going to monthly union meetings so I could understand more. The more I learned, the more I realized…WOW, this union really does fight for worker rights…and I’m one of those workers! I love what the union stands for. The work we do is so important, we have to stand together and know our worth. We lift each other up. Together in our union, we have a voice.”

Eager to learn more about her union, Diana recently chose to participate in SEIU’s Member Leader Development Program (MLDP). MLDP participants help build our union by connecting with other homecare and personal support workers about the value of union membership.

Diana says she absolutely loves being a Member Leader. “Many don’t realize half the things our union does for us, how we fight for each other. It’s great to pass that knowledge on to others, to reach out to other caregivers in the community, to bring them out of isolation. It’s nice to connect with other caregivers who understand the work you do.”

Married for 12 years, Diana and husband Thom live in Gold Hill and are raising their 6-year-old grandson. They enjoy fishing, crabbing and going to Oregon Ducks games.