This post covers the new contract for homecare and personal support workers.
Click these links to access the full Tentative Agreement Summaries for Homecare or Personal Support.
Tentative Agreements can be translated into your preferred language by clicking on one of the links above and going to “SELECT LANGUAGE” at the top of the page. Teletown Halls were held to answer questions for those with a preferred language other than English on October 7 in the following languages: Tiếng Việt, 中文, عربیة, Aaf Soomaali, Românește, 한국어 and in Spanish on October 11. 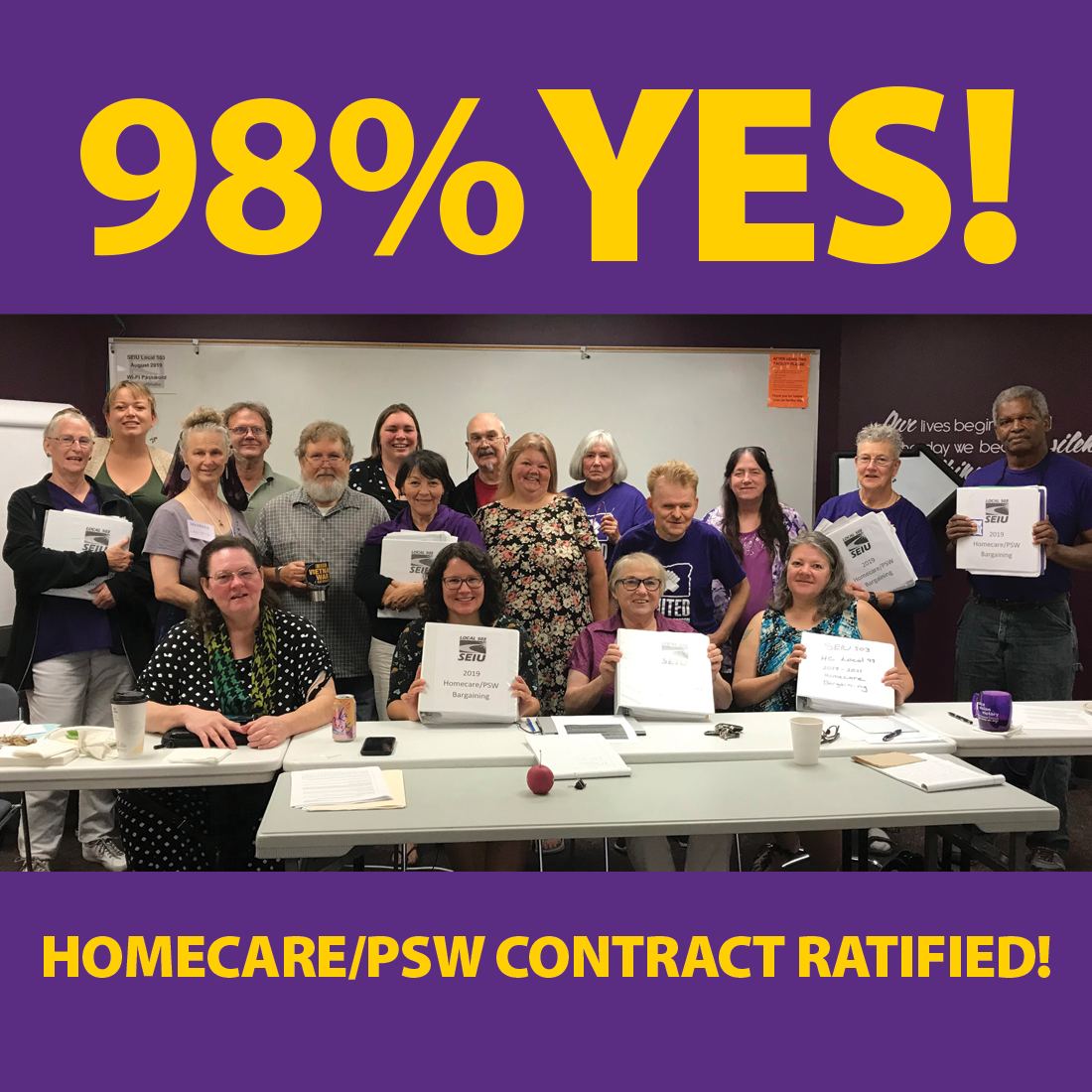 Back in December, our Homecare Bargaining Team conducted surveys and went on the road to hear SEIU members’ top priorities for our next contract. We heard loud and clear that members wanted a wage increase. We also learned that 73% of homecare and personal support workers do not have a retirement plan, and that hundreds of us had experienced late pay checks. In September, the bargaining team settled a contract with the State that will raise wages, create a retirement plan for homecare workers, address the late pay issue, and more! Members voted overwhelmingly to ratify the agreement. Below you’ll find the highlights of the new contract.

✓ Win a “salary pot” through the Legislature’s budget process

O Get our raises and member benefits

We win contracts because we stick together in Union. In order to vote on your contract or get access to member benefits, you must be a member of SEIU 503. You can sign up online at any time, call us at 1-844-503-SEIU (7348), or speak to a union steward in your worksite.

Wages
Homecare workers will receive a $0.35 per hour raise on January 1, 2020, bringing our base pay to $15 per hour! Our Union has long fought to bring the base pay rates up to $15 to stay above the minimum wage in Portland.

Retirement
We reached a landmark agreement with the State to create a path toward retirement security.  It’s a huge achievement that will help improve the economic stability of our members, as well as reducing turnover and improving the quality of care that consumers receive.

The agreement will begin in 2020. We have a commitment from the Governor and DHS to raise wages up to $0.77 per hour (5% of the new $15 base pay) to fund participation in OregonSaves. This is a groundbreaking retirement plan that’s portable, meaning you can take the plan with you even if you change jobs. The plan will be automatic, but workers will have the option to opt-out. Click here to learn more about OregonSaves.

Fixing Late Pay Issues
Earlier this year, DHS admitted to issuing 10,000 late paychecks in 2018. Clearly, their system isn’t working. That’s why the bargaining team fought and won a process for compensating homecare workers when late payments are not our fault.

In instances where the State has issued a payment late, the State will compensate the worker a penalty fee equal to $20 per calendar day, not to exceed the gross amount of the late payment. This will help compensate homecare workers, while also creating an incentive to make sure we’re paid on time, every time!

This is a first-in-the-nation policy, spelling out homecare and personal support workers’ rights when they feel unsafe is someone’s home. Many workers are in a vulnerable position working in other people’s homes, and we need to be able to call 911, report inappropriate behavior, and protect ourselves without fear of losing our income or losing our provider number.

This historic policy will go a long way toward ensuring that no homecare worker has to risk their paycheck just to feel safe.