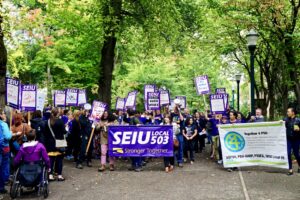 The classified staff at Oregon’s public universities, who do everything from custodial duties to servicing the IT systems, have voted overwhelmingly to authorize a strike. For years they have seen low wages and disrespectful working conditions, and despite receiving over a $100 million in additional funding from the Oregon Legislature and increased tuition revenue, the highly-paid administrators on the other side of the table want to continue this pattern in their next contract. While tuition rises and classified salaries stay low, administrators making six-figure salaries give themselves raises. This isn’t about money, it’s about priorities. The universities need to invest in students and the staff that make campuses work.

“I’m here supporting the rally for SEIU workers because our classified staff deserve a wage that keeps up with the cost of living in Oregon,” says Sarah Erickson, a graduate student studying math at Oregon State University who participated in a bargaining rally on September 12th.

Students from around the state have been showing their universal support for the classified staff stepping out on strike, destroying attempts by the administrator to pit students and employees against each other.

“I am here to support SEIU because all of our working conditions are the learning conditions for students, and we all deserve fairness,” says Keisa Clark, a media studies graduate student at the University of Oregon who joined the pre-strike rally on September 17th.


The classified staff are an essential piece of campus life, whose work ranges from processing student loan information to setting up student housing to ensuring the buildings run appropriately. Unlike the administrative staff, they make an average of $40,000 a year, and hundreds make less than $15 an hour. This leaves one in six classified staff at the universities eligible for food stamps.

“I support the workers and support fair contracts for them,” said Madeline Frisk, an undergraduate student at Portland State University studying educational leadership.

Students and classified staff are rallying around a shared concern in how the school budgets are being applied. Classified staff struggle to make a living wage, and tuition costs continue to skyrocket, saddling Oregon students with huge amounts of debt. Students in Oregon are now coming away with an average of more than $27,000 in student loan debt, which will follow them around as they try to join the state’s economy. This comes from years of poor priorities, where administrators chose to spend tax dollars on large salaries for university presidents and football coaches rather making educational affordable or paying living wages to staff.

“It’s important to support our classified staff or this university is just going to fall apart,” Nick Fisher, a graduate student in the anthropology department at Oregon State University. 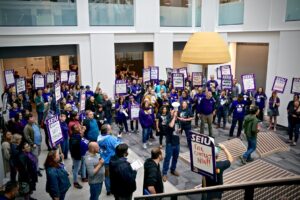 The Oregon Student Association, an advocacy group that focuses on supporting students across the state of Oregon and improving their educational conditions, has officially sent a letter of support for the classified staff in bargaining.

“Our educational institutions are a valuable resource to many Oregonians; both current and future residents, and those from outside of the state who see value in the education our Universities provide. They are affordable when compared to the institutions that surround the state and, in many cases, are one of the main providers of jobs in our communities,” wrote their executive board in a joint letter to university leadership. “We want to see affordability and success programs for students prioritized and we want to see fair pay and good treatment of the faculty and classified staff that support and help us every day. This means supporting them as they seek fair compensation.”

If the classified staff strike on September 30th, this will be shortly after students have flooded back onto campuses across Oregon. This gives them an opportunity to join these employees on the picket line, to build strong campus connections, and many student organizations and unions representing student workers have already pledged this support. As employees and students come together in this common struggle to make Oregon’s public universities a great place to work and learn, we will have the ability to shift our state’s priorities back to being both staff and student focused.