This year, our union has dedicated over $30,000 in funding for members facing uncommon disasters or hardships. Our Fire & Evacuation Assistance Fund provided $7000 directly to members with an additional $4000 donated specifically to local organizations providing on-the-ground disaster relief during one of Oregon’s most intense wildfire seasons in recent history. Through our Immigrant Member Assistance Fund, we have set aside $20,000 in funding for members who are seeking to address their or a family member’s legal status. 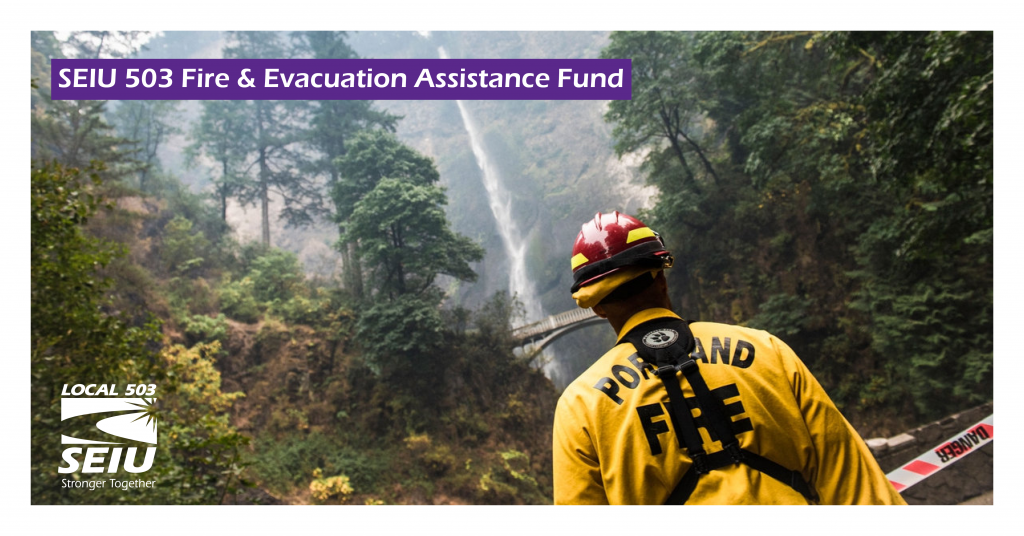 The Chetco Bar and Eagle Creek fires are just two of nearly 30 fires that burned hundreds of thousands of acres, displaced thousands of Oregonians, and impacted nearly everyone living in the state. SEIU members were among many of those living and working in communities directly impacted by these fires.

Gold Beach DHS Case Manager Rhonda Morgan contacted 503 President Steve Demarest in the heat of the Chetco Bar Fire, which would become the largest fire of the summer. Our Board unanimously agreed to set aside $5500 in hardship funds to be provided to SEIU 503 members directly impacted. “[My family and I] were level 3 evacuees due to the Chetco Bar,” states a member in Southern Oregon who was displaced for four days. “The stress that was added to my family’s life was horrible. Having access to help was amazing.”

Just a few weeks later, our Board unanimously agreed to double the amount of assistance funds, to open up eligibility to members directly impacted by any wildfire in the state, and to make a donation to the Oregon Volunteer Firefighters Association and the Hood River County Mike Anderson Search and Rescue Fund. By the end of fire season, $7000 in assistance had been provided to 48 members throughout the state. Though new requests for fire assistance stopped in early October, our Board of Directors is now considering the establishment of a dedicated “Disaster Relief Fund.”

While many members have been seriously impacted by these fires, we have other members  facing a different kind of hardship. Nearly one in ten Oregon residents is an immigrant. And while immigrants are an integral part of building a just and vibrant society, many members of immigrant communities have been pushed into the shadows in the current political climate.

“I felt like we were participating in the conversation, but I wanted to know what we could do to create space and support for members in these communities,” said DHS Compliance Specialist Carmen Morales Mayoral. “If a primary breadwinner gets deported, what could happen to the family?” The American Immigration Council reports that 90,000 citizens in Oregon live with at least one family member who is undocumented.

Knowing that our union can be an avenue for hope and change, Carmen met and worked with community leaders to figure out how SEIU 503 could best provide direct assistance to members in need of support. Joined by a diverse group of members, Carmen reached out to the Board of Directors to establish an Immigrant Member Assistance Fund in March 2017.

Our Board unanimously adopted the Immigrant Member Assistance Fund, allowing members in good standing to apply for modest, one-time grants in case of a status-related emergency, which members can use for themselves or a parent, spouse, or child. “My spouse is a US citizen, and Oregon has been our home for decades,” states a Willamette Valley member who received assistance. “But just the application fees alone cost about one week’s worth of pay. It can be overwhelming without any help.”

Since its formation, the Immigrant Member Assistance Fund has awarded over $6500 in grants to members working to secure legal status for themselves or a family member.

SEIU 503 members can complete the Immigrant Member Assistance Fund’s online application for themselves or members of their family at http://bit.ly/503IMAF