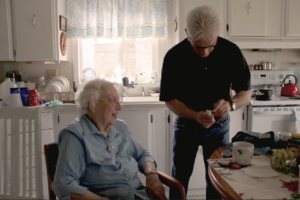 Sarah Bennett is a homecare worker, one of the tens of thousands of people in Oregon who provide in-home support services for seniors and people with disabilities.

“I became a caregiver because I pretty much had to become a caregiver, for my family and my extended family, when they were going through lots of hardships and there was no one else around to take care of them,” says Sarah Bennett, a private-agency homecare worker based in Eugene.

Almost thirty thousand people are employed through the state homecare system, where homecare workers are paid almost $15 an hour, have healthcare benefits, adequate training, and a union contract. Sarah is not one of these homecare workers.  Instead, she works as one of the additional ten thousand workers in the rapidly growing private homecare agency system. By contrast, this sector of in-home care operates with little oversight and no standards in training, pay, benefits and working conditions.

A public records request filed by SEIU Local 503, the state’s largest union representing long-term caregivers,  revealed that in 2017, private homecare agencies in Oregon saw a 69% turnover rate, attributable to the low pay and difficult working conditions.  While the private homecare agencies received $23,322,917 in Medicaid payments to provide care to Oregon consumers in 2017, workers at private agencies are often paid barely above minimum wage.

Oversight of private homecare agencies by Oregon’s understaffed Health Authority is minimal Public records reveal a track record of violations by private agencies like Visiting Angels and Home Instead, include failure to procure background checks, violations of client rights, mishaps with medication, and other problems emblematic of a system in need of reform. Unfortunately, consumers trying to choose a private agency for the care of their loved ones would have no way to know what each agency’s record is–this information is only available through an expensive public records request to the state.

The lack of adequate training has also raised concerns. Workers report that training is often little more than a few printouts, a brief slideshow or an outdated YouTube video presentation.  Unlike the state homecare system, which has very specific training requirements and a pathway to enhanced skill certification, private agencies operate in the regulatory wild west.

“A lack of training affects the clients a lot,” says Joy’e Willman, a professional care provider who has experience working in both the private and state care systems. “Private agencies put staff on a list and treat you like a temp service,” says Willman.  In 2017, private homecare agencies had 525 violations of industry rules, including a full 95 violations for breaking training requirements. Twenty-three of the agencies surveyed in Oregon had some problem with their background check system, including neglecting to administer proper background checks on new employees that are necessary for the safety of the clients.

All of this means poor outcomes for the clients — seniors and people with disabilities — who are rapidly increasing in number as our population ages. Care providers around the state have been rallying around the newly introduced Senate Bill 669 as a solution. Initiated by both state and private homecare workers, SB 669 would set universal training standards, improve working conditions for care providers, and penalize agencies that refuse to follow the rules. These changes would help create a safe environment for both staff and their clients.

“I’m supporting this bill because I’m living this work,” says Joy’e Willman.  “I think it would get rid of the fly-by-night agencies that don’t care about the clients or the workers.  And it would bring up the whole healthcare system to be more professional.”

Bennett agress. She supports SB 669 “because the standards of caregiving for private agency work is extremely lacking.  When we come together to improve the bottom line, everyone wins.”

Right now SB 669 is in front of legislators and has moved to the Ways and Means committee, but will continue to need the support of care providers from around Oregon.