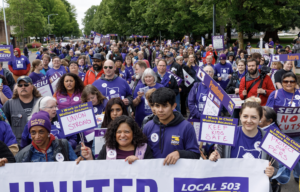 After twenty-two hours of bargaining, Oregon public university workers early Saturday morning reached a tentative agreement with university administrators on a new contract that covers wages, benefits, and other workplace policies. The agreement follows months of negotiations and worker actions, including a strike authorization, in pursuit of a fair contract.

“This is a win for the 4,500 workers who dedicate their lives to Oregon universities,” said Melissa Unger, executive director of SEIU Local 503. “Workers stuck together to demand a contract that respects the critical role they play in supporting our students and keeping our campuses running. Together, we fought back take-aways proposed by management on wages, health care, steps, and personal days, and won higher wages for all workers. This hard-fought victory is a testament to the strength and solidarity of Oregon’s front-line university workers.”

“Classified workers are the backbone of Oregon’s universities,” said Rob Fullmer, bargaining team chair and IT specialist at Portland State University. “This contract acknowledges the incredible value that university workers bring to our students and to our campuses. When Oregon’s public employees work together and make their voices heard, we have the power to move Oregon families forward and make our state a better place.”

We were only able to come this far because you are your coworkers were ready to stick together and walk out on Monday. Together, we fought back take-aways proposed by management on wages, health care, steps, and personal days, and won higher wages for all workers. This hard-fought victory is a testament to the strength and solidarity of you and your coworkers. We have never built a campaign this strong, which is why we won the best contract we have seen in over a decade. 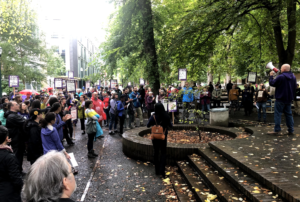 SEIU members: have a question about the tentative agreement? Click here to submit it and we’ll get back to you within 2 days.