25 Years Ago SEIU 503 Went on Strike; Today We Face A New Threat 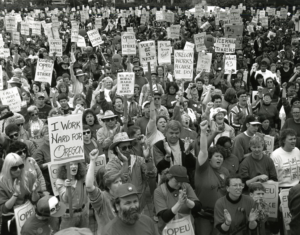 “Union brothers and sisters stand united, our fight is not over. It has just begun, and we will prevail,” said SEIU Local 503, OPEU President Karla Marks to a roaring crowd of thousands in front of the state capitol building in 1995. More than 15,000 public employee members of our union had decided to walk out on strike, shutting down state infrastructure and sending a message to legislators and management about how state employees are essential.

We have just passed the twenty-five year anniversary of the historic 1995 Oregon Public Employees Union (OPEU) strike where workers fought with the state over a ballot measure that cut state employee pay and attacked their retirement. People who keep our roads open, make sure children are protected, run the Oregon State Hospital, and the public universities were out on strike. “Shutting the entire state down,” as Lucy Lahr, union representative at the time said.

We look back at this landmark event in our Union’s history because today we’re facing another threat – a huge loss in revenue as a result of the COVID-19 pandemic. The circumstances may be different from 1995, but the lessons we learned about solidarity and the value of Oregon’s public services and public sector jobs remain as true today as they were 25 years ago.

The 1995 bargaining season intensified when Ballot Measure 8 was introduced by anti-public employee activist Bill Sizemore, which attempted to stop the 6% pick-up on PERS and ban any attempt to make up that 6% in wage raises. Since any raise could be considered a replacement for the PERS reduction, state workers were hamstrung in their contract negotiations.

“That ballot measure decimated our ability to negotiate. Because any raise could be interpreted as trying to make up for the 6% employees were losing,” says Karla Spence, looking back on the strike twenty-five years later. “At the bargaining table, it was a mess. The state felt like they were hamstrung and couldn’t negotiate raises with us. We had filed lawsuits, so we were winding our way through the courts at the same time as we were at the bargaining table.”

“It was an attack on their retirement benefits and it was a pay reduction,” says Steve Demarest, the current President of SEIU 503 who was a represented employee at the Employment Department in 1995. “It was a situation where the workers were just angry about what was being done to them. Here we are in contract negotiations and a window was going to open up where people could express what they felt by striking. It became clear that this year, striking was on the table.”

In-person strike authorization votes were set up, and in Portland it was held in the massive auditorium of Benson High School. “Everyone walking into that packed auditorium knew what the vote was going to be,” says Demarest, who noted that the people spoke their vote with near unanimous enthusiasm. “It was just this overwhelming voice vote to go on strike.” 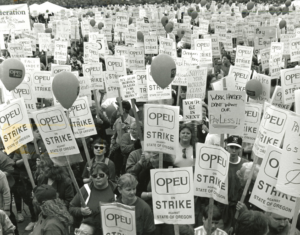 Back in 1987, state employees had gone on a very successful “rolling strike,” where workers went on strike at different shops across the state at different times. This was so successful that it was later prohibited by the State Legislature, so this time the workers had no choice but to go out on strike all at once.

The strike lasted for a week. State operations ground close to a halt, showing just how essential SEIU 503 members are to services that all Oregonians rely on. They called this a “general strike” since it included all SEIU 503 members across the state, not just state employees.

The workers did not just stop there, they continued with acts of civil disobedience, such as occupying the Governor’s office. This all led to a 10,000 person march and rally in Salem, where SEIU members spoke out against the attack on public employees with the support of other unions across the state. The entire membership was on fire over the issue, refusing to accept a “take back” from the wages and benefits they had fought so hard for over the previous decades.

“This was a line in the sand that we weren’t going to let them cross without a fight. So we got in the courts and we got on the picket lines,” says Marks.

The strike electrified the union and led to an increase in membership, and state workers eventually won a great contract in 1995. The following contract, in 1997, was even better, since management knew what our Union would do to fight for a good contract. Measure 8 was eventually determined to be an unconstitutional interference with the right for unions to bargain a contract and was overturned.

‘Workers are willing to strike when they feel under attack, which is how they felt at the time,” says Demarest.

This holds lessons for today, when anti-worker groups like the Freedom Foundation have continued to try and attack the union rights of public employees. As one of the strongest unions in the state, SEIU Local 503 has continued to persevere during difficult situations because members are active and determined to fight for fair workplaces. It also shows exactly how important the political process can be for public employees, and why we have to continue to raise our voices to our elected officials.

“The strike really put an anchor around the members’ belief that politics is union business. That sort of solidified that concept. That if you’re not involved in the political process, you’re vulnerable,” says Marks.

Most importantly, it is a reminder of exactly how powerful we can be when we come together with our union.We have the ability to not just win good contracts, but to totally unseat attacks on our livelihoods and change Oregon for everybody.

As we enter into the May 20 revenue forecast, where we expect to see a significant revenue shortfall, it’s important to remember these lessons from 1995. Public services and public sector jobs are vitally important to communities across Oregon, particularly for low-wage earners, women, people of color, and immigrants – the groups hit hardest by COVID-19. A recovery plan that reflects Oregon’s values will support all Oregonians, white, black and brown,by protecting the services and jobs all of us rely on.

Together, we’re strong enough to make sure that happens.