Issued on behalf of the SEIU 503 Civil and Human Rights Committee: 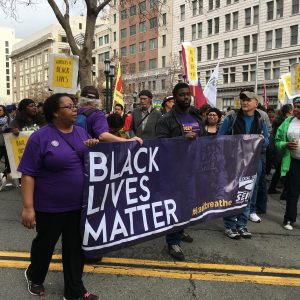 Like many of you, we watched last week’s senseless acts of violence in Baton Rouge Louisiana, Falcon Heights Minnesota and Dallas Texas with a sense of familiar dread. They were three deadly echoes of so many more senseless acts in our nation’s history, each with their own painfully familiar script: Offer thoughts and prayers, look for who to blame, who to be angry at, and search for solutions that seem to be out of reach.

Images of violence against black Americans—including murder—feels like a shocking new phenomenon to many of us; yet this has been the everyday reality of millions of black Americans for centuries. These are not unfamiliar waters to our country.

We know that we join many of you in that we have grown tired of waiting for change, tired of waiting for the next incident to occur, and tired of these tragedies becoming all too common. But while we search for answers and attempt to make sense of all this senselessness we must not let our voices be silent.

As Dr. Martin Luther King, Jr., said, “Our lives begin to end the day we become silent about the things that matter.” So as a union we must not only recognize that black lives matter, we must also proclaim it loudly, and proudly, and with conviction.

We must say the names of the innocent victims of a system so clearly stacked against them: Michael Brown, Tamir Rice, Freddie Gray, Sandra Bland, Alton Sterling, Philando Castile, and far too many others—black lives whose names we know, and far more that we don’t.

We must also be clear that by saying black lives matter we are not saying there has to be a choice made between supporting members of the law enforcement community and supporting the citizens they are sworn to protect. And in the tradition of great civil rights leaders, we must not support or tolerate violence.