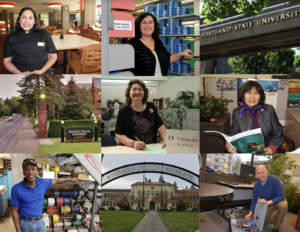 A close examination of the universities’ budgets reveals that this backslide is a choice, not a reality that administrators were forced into.

“Since shedding their state agency status in 2011, universities have had broad autonomy over their budgets,” said Daniel Morris, the author of the study. “They’ve chosen to spend on debt-funded construction projects, out-sized executive salaries, and administrative bloat while tuitions have risen and front-line staff fall further and further behind.”

One of the key findings of the report is the gap between administrative salaries and those of the front-line staff doing IT support, library services, facility maintenance, and dozens of other critical jobs on campus. Hundreds of non-faculty staff earn less than $25,000 per year. About 1 in 6 make less than the food stamp threshold for a family of four. The bottom salary step is so low, it would be illegal in Portland – falling short of the minimum wage.

Meanwhile, out-sized salaries among upper management are the norm. Presidents of Oregon’s largest public universities are paid more than $600,000 a year, more than six times as much as Oregon’s governor. Four university coaches have a base salary of $1 million or more. There are 70 people who make $400,000 or more, and 411 who make more than $200,000.

There was no talk of “budget shortfalls” or “difficult choices” when management gave themselves a 3% raise this year. But when it comes to taking care of their employees, suddenly the money is hard to find.

It’s not all wages. In their most recent offer to employees, management proposed tripling the cost of shift meals for the low-wage workers who staff university kitchens.

“It’s a slap in the face,” said Ruby Thompson, a custodian at the University of Oregon. “I’m better off than some, but I’ve had to borrow money—money I probably can’t pay back. It’s debilitating. If things don’t change I will have to quit and find a job somewhere where they respect people.”

Management’s current offer would give Ruby a 84 cents per hour raise over the next two years –  $34 per week before taxes and her out-of-pocket healthcare costs. Read Ruby’s story here.

The report also takes a close look at university budgets, dispelling the myth that a good contract for staff would come at the expense of higher tuition for students. University net positions are up 3%. Operating revenues are up 8.4%. State funding is up $100 million. It is not economics forcing management’s position on tuition or wage negotiations with union-represented staff, it is about priorities.

One such “priority,” appears to be administrative bloat. Universities have a worker-to-supervisor ratio of 5.4 to 1 – about twice the number of supervisors as other public employers in Oregon. This signifies the opportunity to cut unnecessary supervisor positions. However, universities have prioritized these positions in their budgets, while tuition goes up and front-line staff fall behind.

Capital construction projects are another big ticket item on campuses around the state. Since 2009, the state committed to paying off $824 million in University Capital Construction bonds. As the debt load grows, so does debt service. A growing share of university revenues goes to pay off these debts, which creates greater pressure to raise tuition. In 1999-2001, less than 3% of state support for public universities went to debt service. In 2017-19, 16% did.

Many university employees value the work they do on campus. Angela Canton, an administrative coordinator at Portland State University graduated in 2006 and hasn’t left campus since.

After 18 years she has reached the top of the salary scale and earns $45,552 per year before taxes and out-of-pocket healthcare costs. She says she is better off than a lot of her colleagues, but still struggles to get by – relying on scholarships for her son’s sports and after school programs or having to choose between an unexpected expense and putting off a bill for a few months.

“I can’t remember the last time I got a meaningful raise,” Angela said.

Despite a strong economy, university management has offered scant pay increases over the last several years. Many workers like Angela have fallen behind the rising cost of living, particularly in Portland.

“When we talk about a strike, it’s a hard conversation,” Angela said. “My son told me he was afraid that we wouldn’t be able to buy groceries if I’m not getting paid. That’s real. But I‘m ready. Administration needs to see our worth. They need to see what we really do and if it takes a strike to show them, that’s what we’ll do.”

At the end of the day, it’s all about respect. University workers won’t settle for disrespect.

“I believe that public universities should aim to provide affordable education and good jobs in our communities,” said Darrow Omar, a program coordinator at Portland State University. “My coworkers and I are struggling to get by. The students I know are struggling, too. We know that management can do better.”