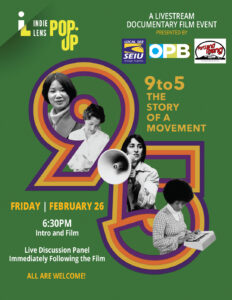 Save the Date! RSVP here.

Let’s have a movie night!

SEIU 503, in partnership with Jobs With Justice Portland Rising Coalition, will be hosting a free livestream virtual screening of the film “9to5: The Story of a Movement” on Friday, February 26 from 6:30pm – 9pm.

The film will be introduced by SEIU Local 503 member leader Theodora Ko Thompson from the University of Oregon. Theodora is SEIU 503 Statewide Secretary and sits on the SEIU Local 503 Womens Council, the Civil and Human Rights Committee and more.

After the film, there will be a livestream panel discussion and question/answer session with Theodora and members of other progressive organizations, including Tina Turner-Morfitt, President of the Oregon Coalition of Black Trade Unionists & AFSCME union leader, and Nikki Mandell with Jobs With Justice Portland Rising Coalition, among others.

Produced and directed by Julia Reichert and Steven Bognar, “9to5: The Story of a Movement” depicts an inspiring chapter of SEIU’s history and provides an opportunity to expand our – and our members’ – shared understanding of our union by deepening our awareness of the leaders and organizers who came before us.

The documentary is about 9to5: The National Association of Working Women, the feminist labor organization that SEIU helped build in the 1970s. If Reichert’s and Bognar’s names sound familiar, it may be because they won an Academy Award last year for American Factory – a powerful film about workers at an auto parts factory in Ohio.

When Dolly Parton sang “9 to 5,” she was doing more than just shining a light on the fate of American working women. Parton was singing the true story of a movement that started with 9to5, a group of Boston secretaries in the early 1970s. Their goals were simple—better pay, more advancement opportunities and an end to sexual harassment—but their unconventional approach attracted the press and shamed their bosses into change. Featuring interviews with 9to5’s founders, as well as actor and activist Jane Fonda, 9to5: The Story of a Movement is the previously untold story of the fight that inspired a hit and changed the American workplace. 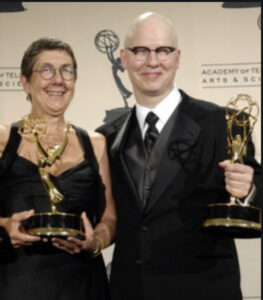 Ohio-based Julia Reichert is a four time Academy Award nominee and Oscar winner for her documentary work. Julia’s student film at Antioch College, Growing Up Female was the first feature documentary of the modern Women’s Movement. It was selected for the National Film Registry. Her films Union Maids and Seeing Red: Stories of American Communists, (with Jim Klein) were screened worldwide, nominated for Academy Awards for Best Feature Documentary, as was The Last Truck, as a Short. Her film A Lion in the House (made with Steven Bognar) premiered at Sundance, screened nationally on PBS, won the Primetime Emmy for Exceptional Merit in Nonfiction Filmmaking. Her film, The Last Truck (with Bognar) premiered on HBO, and the Telluride Film Festival. Reichert and Bognar won the 2020 Academy Award for Best Documentary for American Factory. Julia is co-founder of New Day Films, the independent film distribution co-op. She is author of “Doing It Yourself,” the first book on self-distribution in independent film. Julia has been drawn to focus on class, gender and race in her work. She is a mom and a grandma.