This is the second in a series of articles looking back on 2019, and shining a spotlight on the most significant events in our Union. Check out articles #1 and #2.

After a decade of contracts that failed to keep up with the cost of living following the Great Recession, Oregon state employees remained united and won a fair contract in 2019. Year after year, it was always the same story at the Legislature: we value your work, but there isn’t enough money to go around and there are lots of important sectors that need funding.

“We did our part. When our state was hurting financially, we accepted contracts that helped weather the storm,” said Steve Demarest, Oregon Employment Department employee and SEIU 503 President. “Our families sacrificed, but we value our work and the important services we provide to people across Oregon, so we continued in public service. Now that the economy is booming, it’s time to let workers catch up.”

In February, SEIU 503 members added red to our usual purple and joined a coalition led by the Oregon Education Association for a march to the Capitol demanding long-overdue additional revenue to help fund our schools. Having an extra billion dollars a year dedicated to education could free up resources to better fund state services and fairly compensate the people who provide them. Our members continued going to Salem, testifying in support of new revenue — just as we had for years. 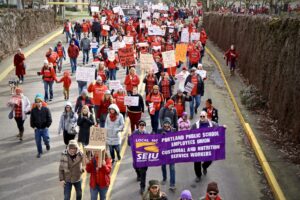 “I do not want to choose between my kids’ education and care for our elderly and people with disabilities,” said DHS Adult Protective Service Specialist Anastasia Godsey. “Corporations do business here, we buy their products and services, their workforce has kids who go to public schools and aging parents who need care. It is only right that corporations are asked to contribute more to the communities they are in.”

This year, the story was different. Because we stayed together in Union, we won! On May 20th, SEIU 503 members joined Governor Kate Brown as she signed the Student Success Act into law, raising taxes on corporations to provide an additional $2 billion in funding for education each biennium. With additional revenue secured, we now had to make sure the now-larger state budget provided increased funding for State agencies and for salary pots to compensate workers. The fight was not over.

Again, our members continued to engage with their legislators, explaining why their work matters and the impact receiving below-market compensation had on them and their families.

“We are so far behind on staffing that it makes the work unbearable,” says Antwon Irving, a Child Welfare worker with DHS. “Fully funding DHS will not only provide us with workers, it will also provide us with training so we can keep workers and retain workers. Many of us are unable to make a living off the wages we are making right now.”

To be sure our voices were heard in Salem, more than 1,500 SEIU members and supporters marched to the Capitol on May 20th. The rally was the crescendo of our statewide United For A Better Oregon campaign with one clear, unified message: It’s time to invest in the people who provide public services in Oregon. 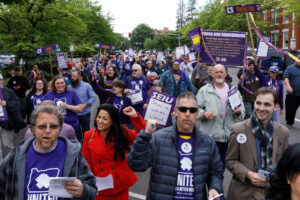 SEIU 503 members’ advocacy paid off. The Legislature doubled the expected budget for salaries for state workers, appropriated $200 million for bargaining. Oregon state employees reached a tentative agreement in early July with management on a new contract covering wages, benefits, and other workplace policies. The contract covers approximately 24,000 employees at State agencies such as DHS, ODOT, and the Department of Administrative Services, who will see up to a 15% raise over the next two years.

“We have heard from members around Oregon that they want to be respected for the work they do,” said Mike Scott, an employee with the Oregon Department of Transportation and a member of the SEIU 503 bargaining team. “This contract is a show of respect, and a sign that even in the face of anti-union organizing and legal challenges to unions, Oregon’s public employees will remain united.”