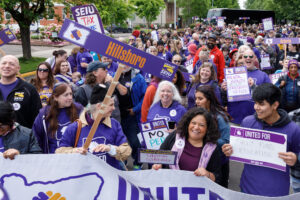 We are now in the final month of the 2019 legislative session. Several key priority bills that directly impact SEIU members moved through the legislature, including passing the Student Success Act, which will raise $2 billion in new revenue each biennium. As session winds down, our political program is focused on a state budget that includes funding to set us up to win strong contracts this summer.

Here are updates on some of our top priorities at the Capitol:

Revenue to fund a strong contract

Members from every part of Oregon have flagged that our next contract needs to include better wages and benefits. Our main legislative priority of raising at least $2 billion in additional revenue — a key step toward funding the economics in our contract — was achieved with the historic passage of the Student Success Act on May 13th.

In the aftermath of the Student Success Act, the Legislature passed SB 1049, which cut public employee retirement. Thanks to the tireless advocacy of SEIU members and our partner in other unions, the impact of these was significantly reduced. But it is still a severe disappointment in an otherwise successful legislative session. Our union is looking at options for challenging SB 1049 in court, and your bargaining teams are focused on recovering the loss at the bargaining table — even boosting overall compensation. Details on the changes are available at seiu503.org/pers-changes-sb-1049-faq/.

HB 2016 (Public Worker Protection Act): Our right to be a member of a union is extremely important. That’s why SEIU is a strong supporter of HB 2016, which codifies best practices in labor management. It dedicates time for workers to receive representation from their union and improves communications channels. The bill passed out of the House and was just approved by the Senate with a minor amendment. HB 2016 now returns to the House for a final vote before heading to the Governor to become law.

HB 3075 (Double Coverage): Our bill to protect double coverage just passed the House and now moves on to the Senate. Passing the House was a major hurdle, but we have work to do to ensure that the bill is adopted by the Senate.

SB 669 (private home care reform): This bill, the top priority in the Care Agenda, would create universal standards for public and private homecare providers rather than the existing dual system that leaves private homecare consumers and workers vulnerable. We continue to work with key stakeholders on amendments that will ensure the passage of the bill.

SB 725 (background check weighted test modifications): The bill passed the Senate and House and now heads to the Governor’s desk for signature.

HB 2015 (Driver’s Licenses for All): Passed by the House, the bill is now moving through the budget process.

HB 2005 (Paid Family and Medical Leave): Time to Care Oregon continues moving forward with negotiations and the bill is still alive and could pass this session.